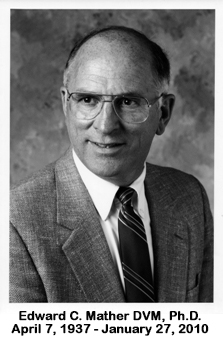 The Online Master of Science in Food Safety program was founded by Dr. Edward C. Mather, DVM, Ph.D., offering online classes to students for the first time in Fall of 2002.  Dr. Mather took an active role in the program until his passing in 2010.

Edward C. Mather spent his early childhood on a farm near West Branch, Iowa. He received a degree in Veterinary Medicine from Iowa State University in 1960 and expanded a veterinary practice in Fennimore, Wisconsin until 1968. At that time he joined the faculty at the University of Missouri at Columbia, obtaining a Ph.D. in Reproductive Physiology. He remained on the faculty as an Assistant Professor and became board certified in the American College of Theriogenology. In 1974 he was appointed Director of the Division of Theriogenology at the University of Minnesota where he was promoted to Professor. Dr. Mather came to the College of Veterinary Medicine at MSU in 1978 as chair of the Department of Large Animal Clinical Sciences. After serving for 14 years he then joined the CVM Dean's office as Associate Dean for Research and Graduate Studies as well as Coordinator of International Programs for the College.

In 1998 he was appointed Deputy Director of the National Food Safety and Toxicology Center at MSU and became Interim Director in 1999. During that time he established the Professional Master of Science Degree Program in Food Safety, an online program which attracts both domestic and international students. He retired from MSU in 2008 as Professor Emeritus. 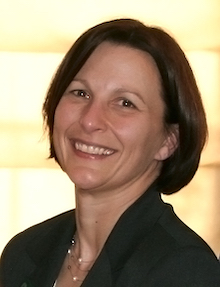 Joining the Online Master of Science program in 2006, Julie Funk, MS, DVM, PhD, lead and expanded the program until 2014, when she was promoted by the College of Veterinary Medicine to the position of Associate Dean for Professional Academic Programs and Student Affairs.

As director, she increased the annual student acceptance by more than 400 percent and improved the student experience through curricular development and increased advising resources. Under her leadership, the MS program was recognized as the leading food safety degree program in the country by food industry leaders, prospective and current students, alumni, and in a third-party market research report.

In her new role, she provides leadership to all academic and clinical veterinary programs, which include faculty, admissions and student affairs, curriculum and program coordination, and resource development and allocation. 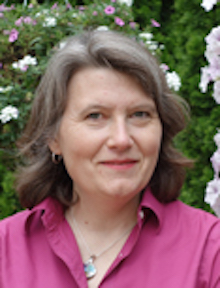 Dr. Melinda Wilkins directed the Online Food Safety program between late 2014 and the spring of 2018, at which time she was promoted to associate professor for One Health, Public Health and Global Health Education in the College of Veterinary Medicine. Additionally, she served as Interim Chair for the College’s Department of Large Animal Clinical Sciences in late 2018 - December 2019.

As director of the Online Food Safety program, Dr. Wilkins expanded the Master’s curriculum through a series of one-credit courses based on current food safety topics, thus adding flexibility and applicability to elective choices for degree students. She increased staffing to enhance teaching, communication and technology resources, and led the development of a non-credit continuing education option which evolved the program into its current 3 segment model under the umbrella of Online Food Safety: The Online Master of Science in Food Safety (MSFS), the Online Continuing Education in Food Safety (OCEFS), and Executive Education (CFSC).

Melinda is a homegrown Spartan, receiving her BS and DVM from MSU and later her PhD in Large Animal Clinical Sciences with a focus in Epidemiology. She left Michigan to begin her career with the USDA, Veterinary Services, as a Veterinary Medical Officer then Area Epidemiology Officer in Illinois. She also received her MPH from the University of Illinois – Springfield, then went on to complete the CDC’s Epidemic Intelligence Service training program in applied epidemiology (EIS ’99). Prior to coming to MSU, Dr. Wilkins served as the Division Director for seven of the twelve years she was employed by the Michigan Department of Community Health, Bureau of Epidemiology, Division of Communicable Disease.